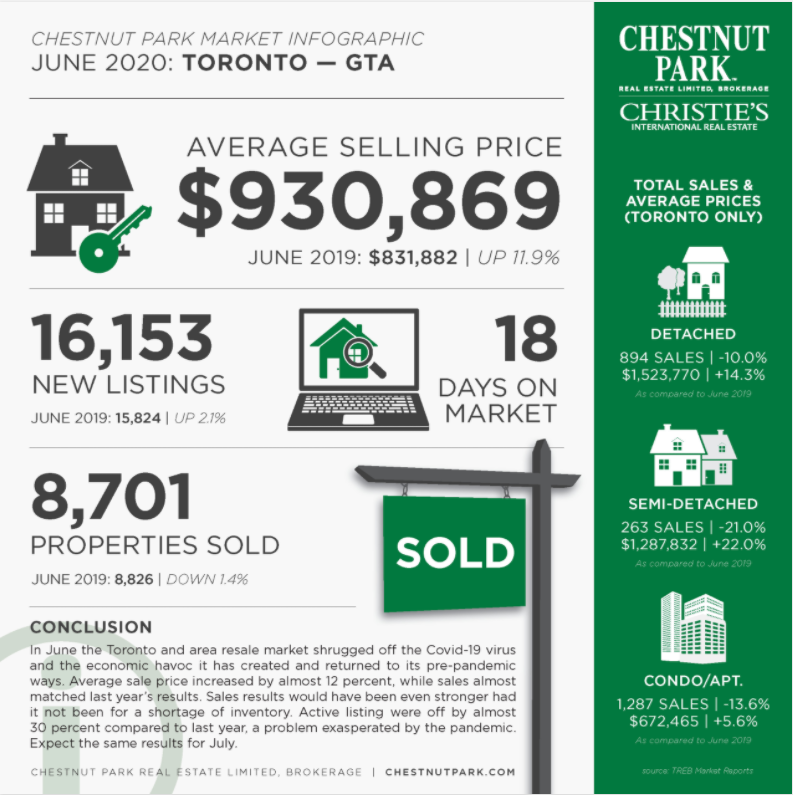 By any standards, the residential resale market’s recovery in June was nothing but phenomenal. The lockdown and emergency measures implemented by the Province in mid-March literally brought the market to a standstill. It stayed that way throughout April, but by early May, we could sense recovery. By May the industry, agents, buyers and sellers had adjusted to the rigid in-person showing protocols – masks, gloves, sanitizers, social distancing, and no-touch viewings. Also, by May, the pent up demand, already present before the pandemic, began to push against the restrictions imposed by Covid-19 and sales began to take place.

In June sales flourished. There were 8,701 reported sales in the greater Toronto area, only 1.4 percent fewer than the 8,826 sales reported last year. That is a 19 percent increase compared to the 2,961 sales achieved in April, and an 89 percent increase compared to the 4,601 reported sales in May. These numbers represent an unprecedented recovery. Most economists had predicted a much more protracted recovery, a recovery resembling the economic recovery following the collapse of the equities market in 2008.

Unlike sales, which declined in March and then recovered in June, average sales prices did not noticeably decline during this period. In fact, they continued to strengthen, approaching record levels. In June the average sale price for all properties sold in the greater Toronto area come in at an eye-popping $930,869, 12 percent higher than last year’s average sale price of $831,882. In the City of Toronto, the average sale price came in at $1,022,138. Not quite a record but approaching one, and well above Canada Mortgage and Housing Corporation’s $1 Million threshold for high ratio loans. Housing in the City of Toronto experienced increases in all housing types – detached (14.3 percent), semi-detached (an amazing 22 percent), and condominium apartments (5.6 percent) compared to the same month last year.

These increases were stimulated by the resurgence of the high-end market, which was slower in its recovery than lower price-point properties. In June 365 properties with a sale price of $2 Million or more were reported sold. This represents a 42 percent increase compared to the 257 reported sold in this price category last year. It is worth noting that at the market’s lowest point in April, only 67 properties were reported sold in this category. No doubt with the recovery of equity markets over this period, confidence at the higher price points has returned.

The one area of continuing concern is supply, although there was some marginal improvement in June. In June 16,153 new properties came to market. A slight increase compared to the 15,824 that came to market last year. Unfortunately, at month-end, there were only 14,001 properties available for buyers throughout the greater Toronto area, almost 30 percent fewer than the 19,655 that were available last year.

Early indications point to an equally strong July. The factors that drove the market in June are still present and will not be going away – historically low-interest rates, pent up demand, and lack of supply which is creating a “don’t want to miss out” mentality amongst buyers.