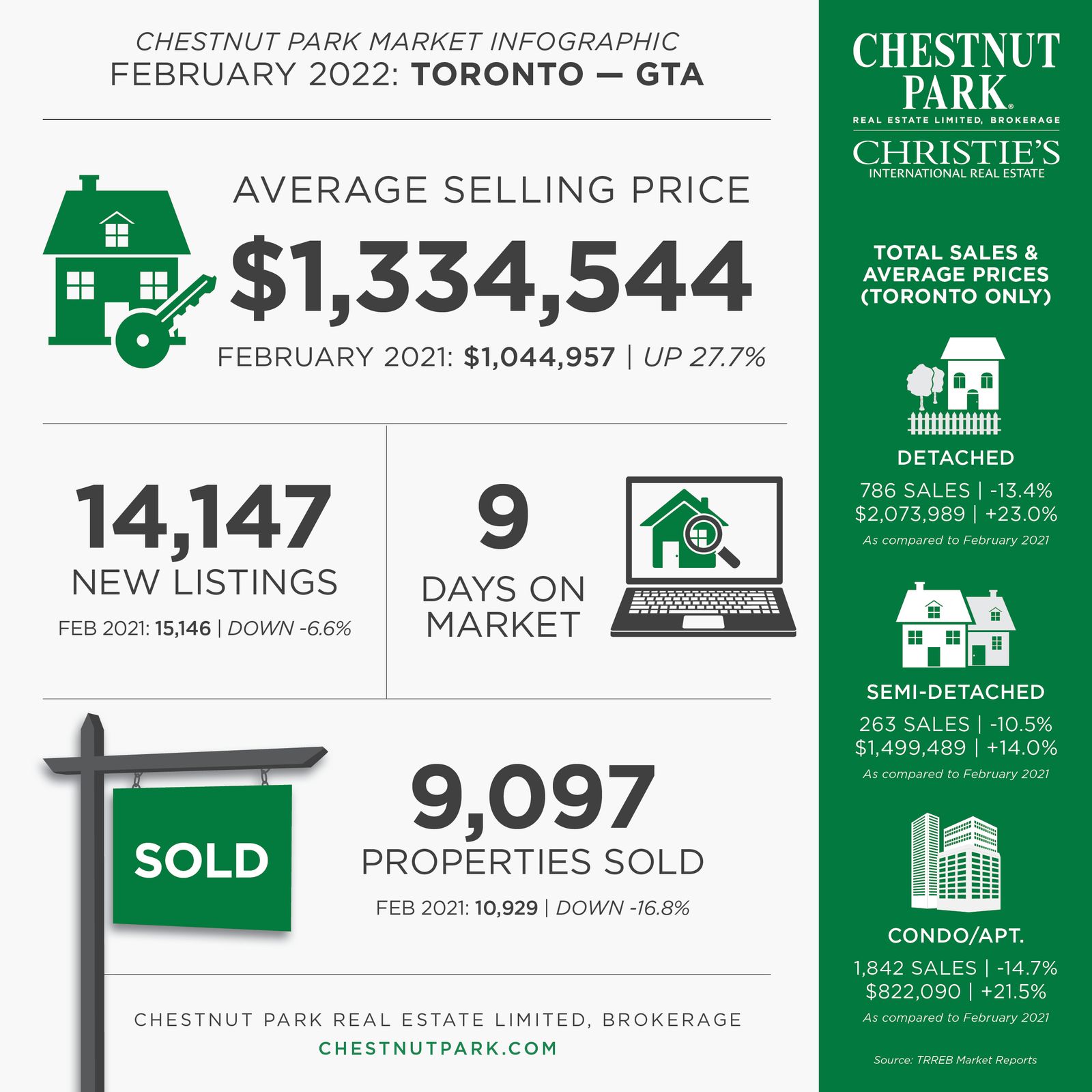 The reasons for this unbelievable increase in prices have been historically low interest rates, a lack of supply, continued growth in population (in 2021 the population of the greater Toronto area is estimated to be 6.4 million, which means that more than 1 in 6 Canadians live in the region) and the fact that there is now a prevailing view that a home is not merely bricks and mortar, where families live and grow, but the most important asset in the accumulation of wealth. The asset valuation affect at play is very similar to why people invest in the equities market, particularly when interest rates are exceptionally low, as they have been.

Given that supply is low, it is not surprising that sales in February were lower than February last year. This year 9,097, a strong number by historical standards, but almost 17 percent less than the 10,929 sales recorded in 2021, all due to supply and lack of inventory.

In February 14,147 new properties came to market, a sharp improvement from the 7,979 properties that came to market in January, but almost 7 percent fewer than the 15,146 new listings that became available to buyers last year. Consequently, heading into March there were only 6,985 available properties in the entire greater Toronto area, 20 percent fewer than at the same time last year. These are critically low numbers. To put these numbers into perspective, the available inventory today is only about a third of what was available at the beginning of 1997. With 430,000 new immigrants expected in 2022, many of whom will end up in the greater Toronto area, there is no immediate relief expected.

Average sale prices continue to be higher in the city of Toronto as compared to the 905 region, but as has been the pattern since the beginning of the pandemic, the gap between the two is narrowing.

In every category records were broken. Of particular note are the prices of detached houses in the city of Toronto, which broke the $2 million barrier. As eyepopping as this number is, in Toronto’s central trading areas the average sale price for a detached properties almost hit the $3 million mark, coming in at $2,952,369. Condominium apartment sales, what used to be the city of Toronto’s least expensive housing form, also broke records with an average sale price of $863,210. Just before the pandemic, the average price for all properties sold in the greater Toronto area was a shockingly low $819,043!

In a month that was full of new records, the time that available properties spent on the market before being reported sold can only be described as startling. In February all properties (on average) that hit the market were reported sold in only 9 days. Single digit time periods on the market have been the norm in some trading areas, but never for the entire greater Toronto area. There were 2,772 condominium apartments sold in the greater Toronto area, 1,842 of them in the city of Toronto. They all sold after spending only 11 days on market. There are no longer any meaningful superlatives to describe what is happening in the greater Toronto marketplace.

As we move into the month of March, the burning question is, will rising mortgage interest rates dampen this unprecedented marketplace? The answer to this question depends on how high and how quickly the Bank of Canada raises is rates. Its initial increase on March 2nd was only 0.25 percent, bringing the Bank rate to 0.5 percent. This increase was modest. Given all the other forces that are driving the Toronto and area marketplace, the impact on the residential resale market will be negligible and in fact may have a FOMO (fear of missing out) affect, driving people to buy now before rates get higher in the future. If rates continue to rise to pre-pandemic levels, in conjunction with the record prices for housing now at play, there is little doubt that home prices will plateau. For prices to come down, the downward asset valuation effect would need to be dramatically stronger than the overwhelming upward pressure on the house prices generated by population growth and the prevailing lack of supply.