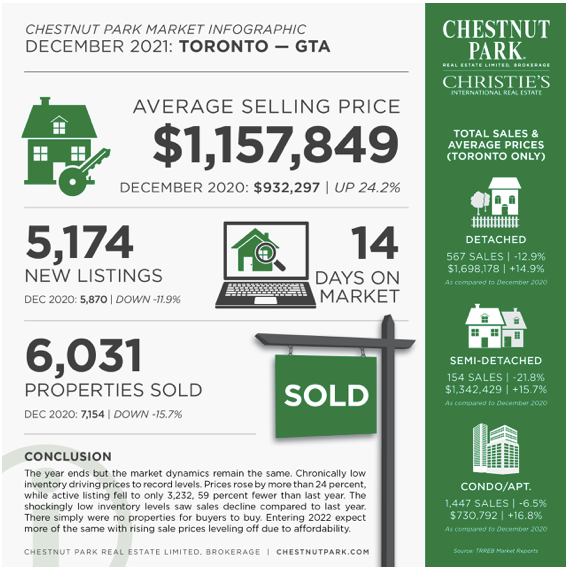 In 2021 we experienced an unprecedented residential resale market. More records were shattered in 2021 than in any other year of record keeping – sales prices, properties sold, and, unfortunately, inventory levels all established new records. As we end 2021 and move into 2022, it will be inventory that will have the greatest impact on the resale market.

Sales declined in December as compared to 2020 only because of a lack of inventory. Demand continues to be at record breaking levels, but to put it bluntly, there just weren’t enough properties on the market for buyers to purchase. That is dramatically illustrated by the fact notwithstanding declining sales, the average sale price for all properties sold, including condominium apartments, came in at $1,157,849, 24.2 percent higher than December 2020.

It should be noted that increases in average sale prices were substantially higher in the 905 region as compared to price increase in the City of Toronto, as the chart below clearly illustrates.

The increase in average sale prices in the 905 region during the pandemic has been nothing but stunning. As forecast in a monthly Market Report earlier in 2021, the difference in average sale price between properties in the City of Toronto and the 905 region has all but disappeared. The reasons for this market change are due to the pandemic driving buyers away from the denser concentration of population in the City of Toronto, the ability to work remotely, affordability, and supply. It would now appear the attraction of supply and affordability may no longer exist.

The luxury end of the resale market also broke records in 2021. In December 473 properties traded hands having a sale price of $2 Million or more. Last year only 287 properties sold in this price category. On a year-to- date comparison, 7,807 properties valued at $2 Million or more sold in 2021 compared to only 3,649 last year, an increase of 114 percent. Sales in the 905 region in this category contributed substantially to this increase in 2021. Detached property sales in Oakville, King, Richmond Hill, Whitchurch-Stouffville and Uxbridge all came in with average sale prices in excess of $2 Million, with King approaching an average sale price of $3 Million. Historically this only happened in central Toronto.

Throughout the greater Toronto area average sale prices continued to be eye-poppingly higher than asking prices. This is also a strong indicator of demand, first witnessed after buyers adjusted to the protocols of viewing and buying properties during the first wave of the pandemic in May and June of 2020. For example, in Oshawa, all properties presented to the market sold in only 9 (yes 9!) days at sale prices 121 percent of their asking price. The case was the same in Pickering. Two trading areas in Toronto also exceeded sale prices of 120 percent or more than asking prices. We are short of superlatives to describe this phenomenon.

How the market performs in 2022 will depend entirely on supply. December’s numbers are not encouraging. During December 5,174 new properties came to market, almost 12 percent fewer than came to market in 2020. What is even more shocking is the fact that entering 2022 there are only 3,232 active listings for the entire greater Toronto area, more than 46 percent of which are condominium apartments. By contrast last year there were 7,892 active listings which at the time we reported were totally inadequate to meet the growing pandemic demand.

Many economists have deemed 1996 to be the year that the Toronto and area market broke from its six year recessional slide and began to show signs of strength and robustness that have continued through to today’s market. That year set a record for sales at 55,779. In 1996 the population of the greater Toronto area was approximately 4.2 million people. Since then the population of the greater Toronto area has grown to well over 7 million people. In December of 1996 the Toronto Real Estate Board reported that there were 16,964 active listings available to buyers in the greater Toronto area. At 3,232 active listings this December, we find ourselves with only 1⁄4 of the listings available to buyers in 1996, and we have a lot more buyers.

So supply will be the major driver in 2022. As immigration numbers to the greater Toronto area will continue to increase, even more supply will be necessary. It will take aggressive, innovative, and rapid thinking, planning and decision-making by all three levels of government alleviate this housing crunch.