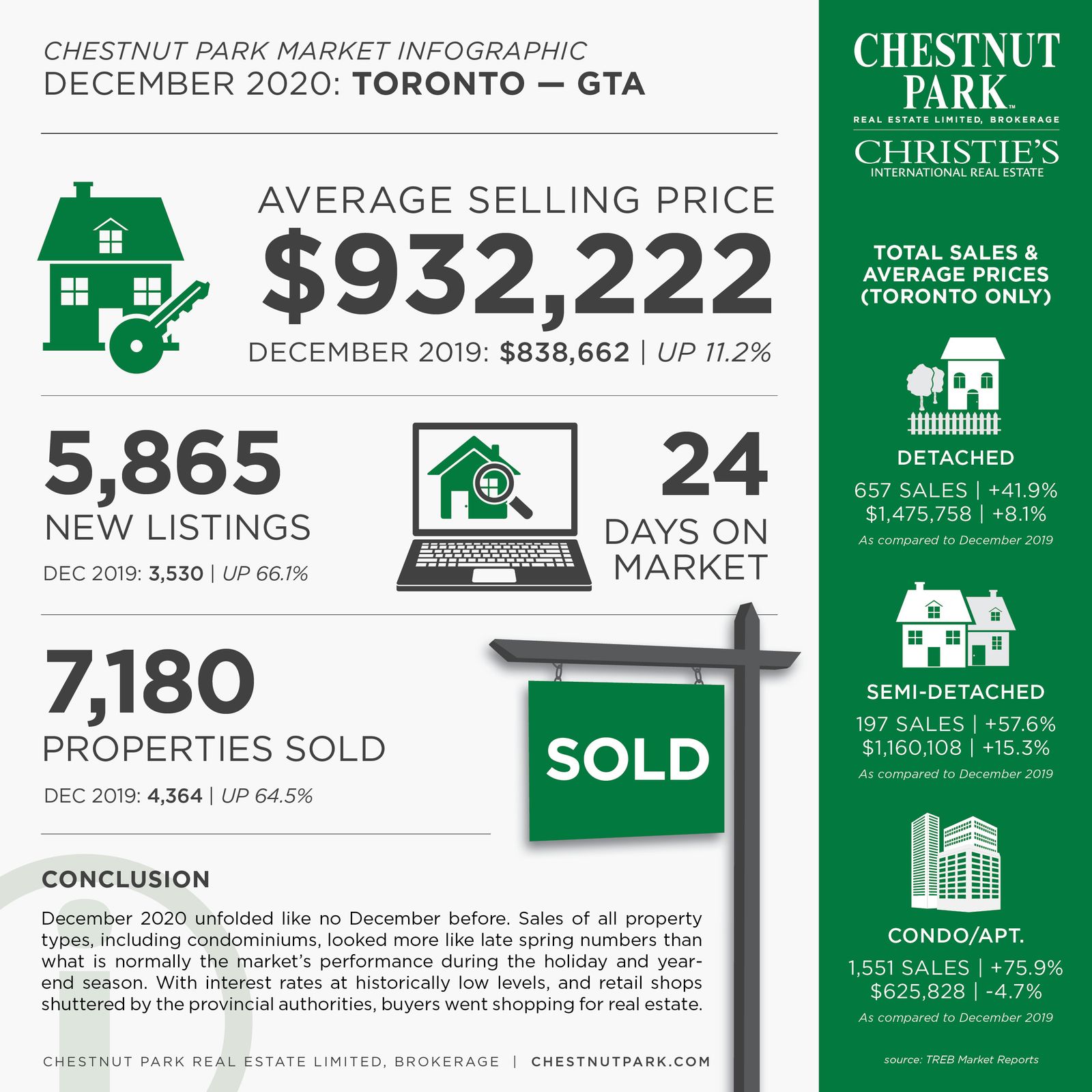 December’s Toronto and area residential marketplace exhausted all the superlatives that we would normally apply to a robust resale market. Not only was December’s housing market strong by historical standards, but it dramatically exceeded historic norms, performing more like a spring market than what we have come to expect of property sales during the holiday season. It’s almost as if the holiday season didn’t exist, and unfortunately, because of the restrictions imposed bythe effects of Covid-19, normal retail shopping was non-existent. Deprived of retail shopping, it appears that buyers focusedtheir attention on housing instead.

December saw 7,180 residential properties reported sold. That is an eye-popping 65 percent increase compared to the 4,364 properties reported sold last December. December 2019 was a very strong month. For example, only 3,746 properties were reported sold during December 2018. It’s not surprising that with this surge of sales, we also witnessed a surge in the average sale price. On a year-over-year basis, the average sale price for all properties sold in the greater Toronto area increased by more than 11 percent, from $838,662 last year to $932,222 this December.

No doubt this huge jump in average sale price was driven by the number of higher-priced properties that changed hands in December, normally a quiet month for luxury property transactions. In December, 287 properties having a sale price of $2 million or more were reported sold. That compares with only 125 last year, an increase of 130 percent. Not surprisingly more than 90 percent of those properties were detached single-family homes in the 416 and 905 regions.

Toronto ($894,000), all as a result of the massive increase of condominium apartment sales at sharply falling prices.

It will be interesting to see if December’s condominium apartment sales were a market anomaly. It may be that the moreaffordable prices have overcome buyer’s need for space and safety. This phenomenon might also be driven by the fact that prices in the 905 region have risen to prohibitive levels.

Having said that sales of ground level properties, detached, semi-detached and townhouses were robust both in the 416 and 905 regions. Price increases in the 905 eclipsed price increases achieved in the 416 region. Interestingly even condominium apartment average sale prices increased by over 6 percent in the 905 region, a stark contrast to what we witnessed inToronto’s central core.

Overall, more than 95,000 properties were reported sold in 2020, a 9 percent increase compared to the 87,751 properties reported sold last year. Notwithstanding the unprecedented socio-economic upheaval experienced universally in 2020 asa result of the pandemic, the Toronto and area resale market results were the third best on record. An extraordinary accomplishment!

Looking at 2021 the economic factors that drove the 2020 housing market remain in place. The key factors are exceptionallylow mortgage interest rates, government stimulus, and a roaring stock market. With interest rates as low as they are, asset acquisitions will continue to drive the housing market. It is impossible to see a change in this scenario until borrowing moneybecomes substantially more expensive than what it is at the beginning of 2021.